This Strategic Master Plan was created to guide the phased reconstruction of Glendale’s Downtown Central Park. The Park is adjacent to The Americana at Brand mixed-use lifestyle center, and includes the City’s Central Library and Adult Recreation Center (ARC). The plan calls for a new east-west pedestrian paseo connecting the ARC and Library with Brand Boulevard and Americana; and the relocation of the Library’s existing east-facing main entrance to both a north- and south-facing entrances on either side of the central reading room, turning the Library into a “town square.” In the long term, the Plan also imagines the Elks Lodge and Armory sites south of Colorado Avenue being developed as a centrally located sports complex.

Phase One, which began mid 2013, rebuilt the alley and parking lot at the western edge of the Park, built a new home for the Museum of Neon Art, and introduced a new pedestrian passage way from the Park to Brand Boulevard and Americana shopping center.

Phase Two is a comprehensive renovation of the Central Library, that completed in early 2017. Under the renovation, the Library’s front door was relocated from the east to the north, aligned with the central reading room. This new north entrance opens to a generous plaza fronting Harvard Avenue and gives the Library a prominent presence towards Maryland Avenue Art & Entertainment District and a public parking structure to the north.

A south entrance to the Library opens to the existing Central Park, which will be developed in Phase Three. This will remove the surface parking lot between the Library and the Park and build in its place an extension of the Phase One pedestrian passage to Brand Boulevard. This passage will be concluded at the east by a new drop in front of the Adult Recreation Center. Finally, Phase Three also involves the reconstruction of the existing surface parking lot east of the Library as a “green” lot with permeable paving and drainage swales.

As of early-2017, the construction of the Museum of Neon Art on Brand Boulevard with its adjoining pedestrian paseo and the reconstruction of the adjacent alley and parking lot has been completed to designs by AECOM and Shimoda Design Group. Phase Two, the renovation and realignment of the Central Library, by Gruen Associates, was completed in May 2017. A third phase, introducing an Armenian American Museum as a new component, will begin design in early 2017 under the direction of SWA Group. 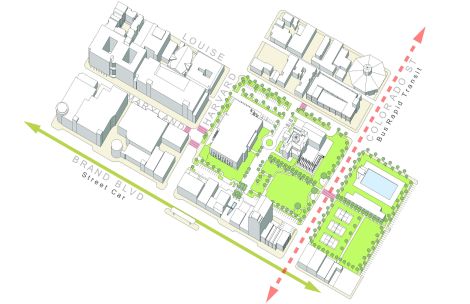