A required course during the fourth year of the Bachelor of Architecture program, Urban Design Theory studies the cultural, sociological, contextual and formal issues of urbanism and their influence on the contemporary design of cities.  The course investigates the relationship between architecture, landscape architecture and urban planning. Emphasis is placed on processes of visual analysis, the role of nature and society, public and private space, human behavior and the physical environment, human diversity, and regulation and public policy.

Programmed as a “study aboard” course at home, students document, investigate, analyze and map a district in greater Los Angeles as a means of illustrating their understanding of the themes, issues, trends and theories outlined in the lectures and readings. This research focuses on the relationship between the theoretical ideas and actual places. In-class writing/sketching assignments and organized tours assist in this confrontation. 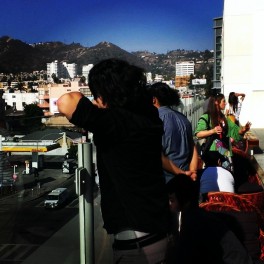 Students see the transformation of La Brea and Santa Monica

Students learn about “Bringing Back Broadway” with Architect Simon Ha

One response to “Urban Design Theory”