After a $15 million renovation, the Glendale Central Library re-opened to the public this past Monday, May 1. Originally designed by Welton Becket Associates in 1973, the renovation by Debra Gerod’s team at Gruen Associates modernizes the Library’s technology infrastructure for the 21st century. The renovation also relocates the Library’s main entrance to face north, opening to a new grand staircase that cascades towards Harvard Street and the downtown retail districts.

The Library renovation is part of a multi-phased strategy to redevelop the Central Park, bringing both the Library and Park into a the urban design framework of the Downtown as a whole.

Of course, the reopening was covered by the Glendale News Press / LA Times: 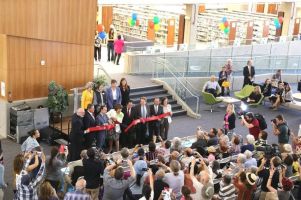