ACE121: Glendale Arts Colony is the result of an RFP for development issued jointly by the City of Glendale and the Glendale YMCA. The program, seventy-two units of affordable housing with a preference for artists on a prominent site in downtown Glendale owned by the YMCA, aligns with the goals of the Maryland Off Broadway Arts and Entertainment District one block away, while the design by Studio One Eleven resolves a number of site constraints and brings coherency to the Y campus.

The RFP that ultimately led to the Glendale Arts Colony asked for development complementing the two existing YMCA buildings: the 1926 landmark Spanish Revival SRO and the three story Brutalist-style gymnasium built in 1977. The RFP recommended the project create an architecturally distinctive urban-style campus of courtyards and paseos with the immediate surrounding downtown neighborhood. The RFP further suggested programming opportunities to take advantage of the recreational services and programs offered by the YMCA of Glendale and their proximity to the Maryland Art & Entertainment District.

The built Glendale Arts Colony fulfills all the goals outlined by the RFP, and complements the adjacent uses in Art & Entertainment District. GAC will support the arts and families with amenities that include two “messy labs” to produce art, a lobby that serves as an informal gallery, community gardens, tot-lot, computer media lab and a formal exhibition space. Additionally, the art colony program leads to one of the more unique features of the project design – a civic gallery anchoring the Louise Street autocourt between the two existing YMCA buildings. Enhancing the existing autocourt with new landscaping, creating dedicated pedestrian pathways that link the YMCA campus to other pedestrian paseos in the downtown, the new autocourt creates the “attractive hotel-style circular entry drive” as required by the RFP. Fronting Kenwood Street is a series of two-story residential units that open to the sidewalk via patios and stoops, anchored by the building’s residential lobby, mailroom and management office. These common spaces are signaled by the tall expanse of glass curtain wall, which is further enhanced by the metal cladding that wraps the corner and extends up to the roofline, creating an appropriately-scaled tower element to mark the main entry from Broadway. By contrast, the upper floors of the Kenwood façade approach and recede from the street to reflect the building-street relationships of the church buildings across the street. Units fronting the podium courtyard have large patios and roll-up doors to allow artists to work outside. The garden itself is designed to accommodate art that will be for sale during scheduled public openings. Given the constraints and complexity of the project’s site and programmatic goals, the scale and massing of the building is remarkably responsive and respectful to its significant architectural and historic neighbors.

As Principal Urban Designer at the City of Glendale, Alan Loomis was the lead urban designer on the “Glendale Arts Colony” project team.  Studio One Eleven was the architect of the project, which was developed by Meta Housing Corporation. 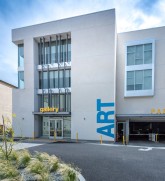 ACE121 Axonometric by Studio One Eleven

YMCA Diagram by Studio One Eleven

“New affordable apartments in Glendale are geared toward artists” Curbed LA [May 31, 2017]