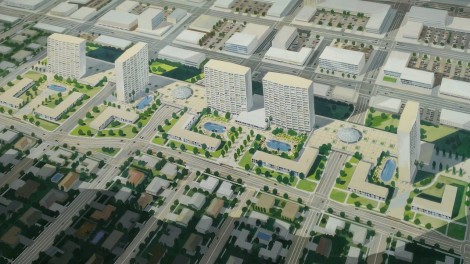 The above image, which illustrates a series of residential towers across the blocks that are today occupied by the Glendale Galleria, is one of the more seductive and enigmatic images in the Glendale Urban Design section’s archives. It obviously predates the Galleria’s design from the early 1970s, and thus presumably emerged during the 1960s. It is actually one of four paintings done by the same artist – the other three representing Brand Boulevard as a pedestrian mall similar to the Kalamazoo Mall; the industrial districts at the former Grand Central Air Terminal runways; and a hillside picnic area. However, no documents, plans or attributions can be found in the Department’s archives to inform us of who produced this coordinated plan for Glendale, why it was created, who commissioned it, why, or what public discussion this vision for the Jewel City generated.

In the spirit of the recent “Never Built” or “UnBuilt” exhibits and publications that examine the Los Angeles, San Francisco, Washington DC, or New York that never was, I decided to look back at some the more interesting projects that didn’t happen during my eleven year tenure as Glendale’s chief urban designer.

Projects like the residential towers illustrated above predate my time in Glendale, as do a number other large-scale and contentious development proposals, such as the Oakmont hillside neighborhoods or competing plans for the Glendale Town Center (today’s Americana at Brand – approved just as I was hired). However, the vision laid out by the Downtown Specific Plan and other initiatives did set the stage for a robust development cycle between 2006 and 2017. Of course, not all the projects proposed in that cycle came to pass. What follows are a few that make up “Never Built Glendale.” 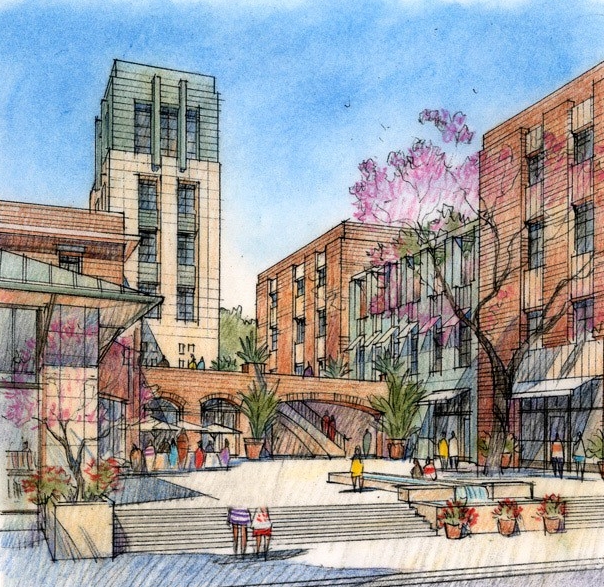 (Above) Glenoaks Gardens by Moule & Polyzoides – The master of the courtyard housing form designed a linked series of residential courts that cascaded into this street-facing retail plaza. This project could have redefined the urban expectations for Glenoaks Boulevard and the standard for multi-family housing in Glendale had it been built. More at via Moule & Polyzoides. 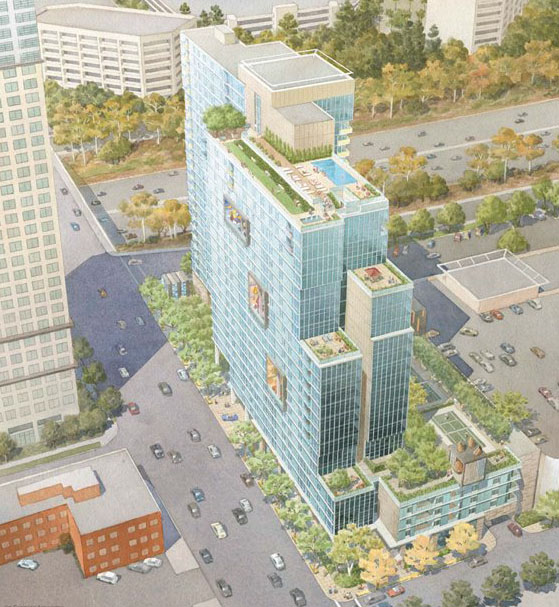 (Above) Verdugo Gardens by Johnson Fain and RCH Studios – A series of sky gardens and terraces would have provided outdoor access on nearly every floor in this 24-story condo tower. This project fell victim to the Great Recession and resurfaced as the 6-story Modera Apartments. More via Johnson Fain. 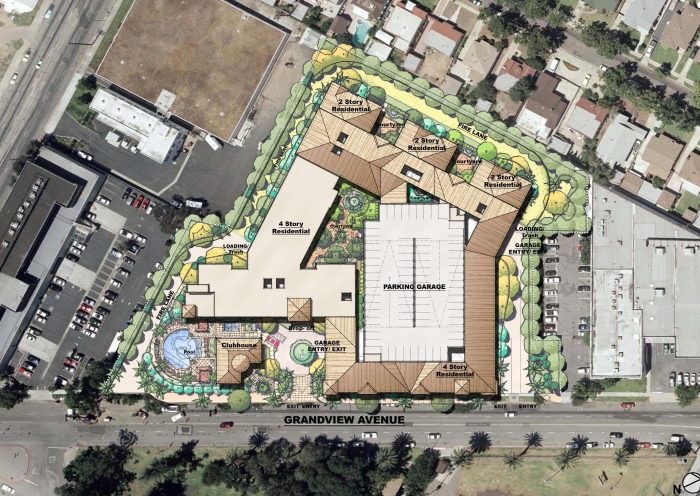 (Above) 1015 Grandview by Cubellis – Sandwiched between low-rise offices, a single-family neighborhood and a park, this large site proved the undoing of many ambitious developers. This proposal for an apartment complex was the product of many design meetings with the architect, and resulted in plan featuring a trio of low level wings separated by courtyards to mediate against the residential backyards, whereas the unconventional location of the pool/clubhouse fronting the street offered a civic presence to the park as well a deep setback for the larger portion of the building.

(Above) 1407 Glenoaks by American General Design – The first proposal for this site on Glenoaks Blvd created a street-facing retail plaza, but required variances from the City’s archaic mixed-use standards. The final approved proposal, while less dense and code compliant, is the unfortunate by-product of NIMBY politics, and locates the residential common space at grade, separated from the sidewalk by a fence, contributing much less to the public realm. More via American General Design. 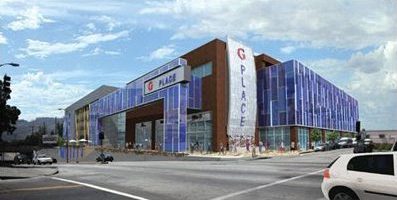 (Above) “G Place” by KDI – This site is currently being built by a housing developer, but at one point a multi-level Korean hypermart was proposed here. The design had many flaws but was programmatically interesting, combing individual shops with a grocery store, spa, and medical offices. Glendale might be able to support this kind of mall, but probably in the downtown, not against the railroad tracks where it the concept was first floated. 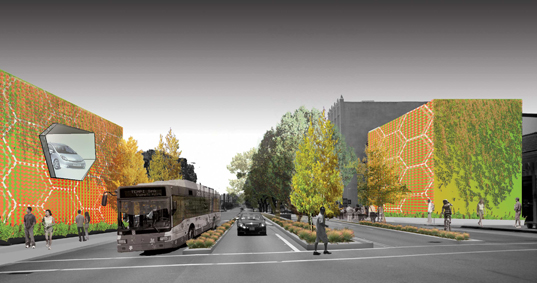 (Above) Brand Boulevard by Osborn Architects – This conceptual project re-imagined the auto dealerships along the Brand Boulevard of Cars as an eco-friendly “green” district with living walls, PV panels, and public transit. More via InHabitat. 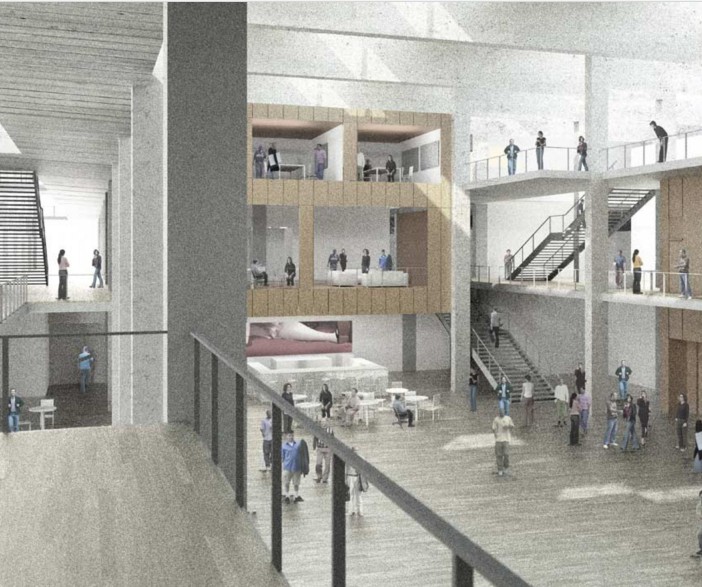 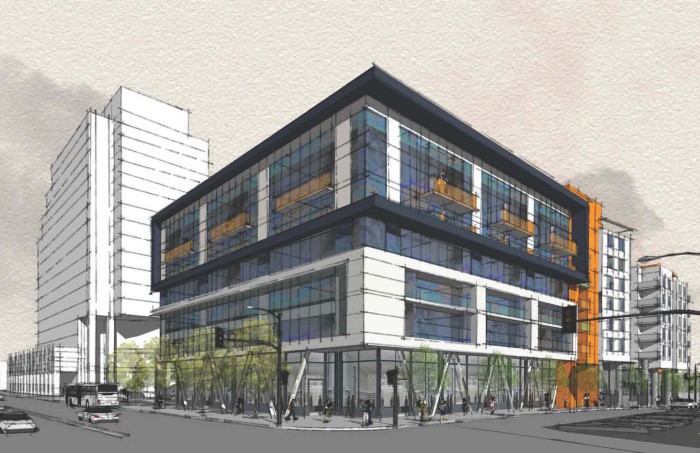 (Above) Brand and Wilson by TCA – One of many designs prepared for this critical vacant site at the heart of downtown. The final scheme, designed by Carrier Johnson, was completed in late 2015.

(Above) Animation Bank by Osborn Architects – The mid-century Fidelity Federal Savings Bank by architect W.A. Sarmiento was to house a museum of animation in this adaptive reuse proposal. The building was later renovated for shared/flex offices. 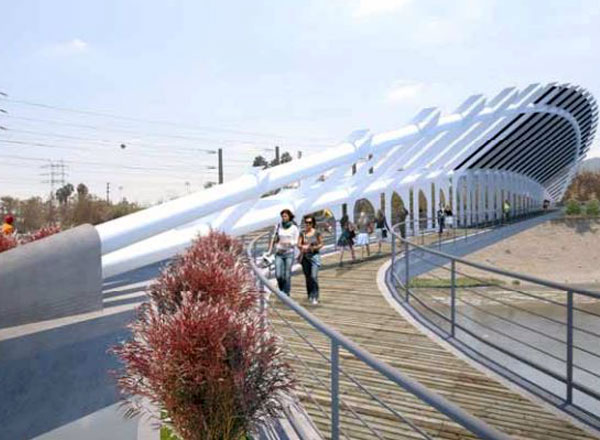 (Above) Los Angeles River Bridge by Atkins and T.Y.Lin International – Two of many alternatives developed for a footbridge across the Los Angeles River at the Glendale Narrows, connecting Glendale with Griffith Park. The City is still pursuing funding and grants to build a version of this bridge some day in the future. More via City of Glendale. 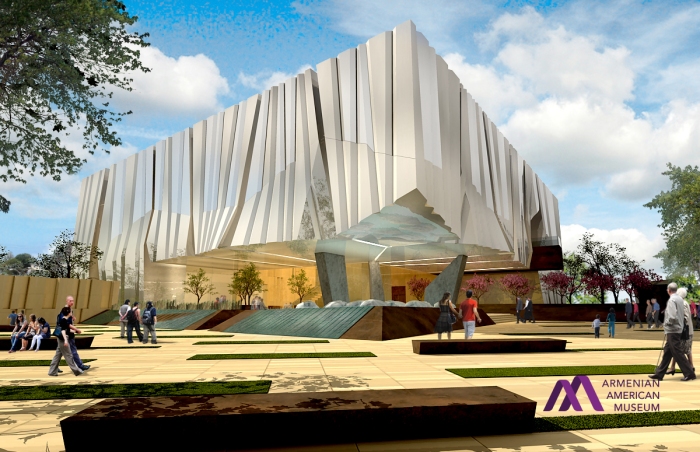 (Above) Armenian American Museum by Alajajian-Marcoosi Architects – Originally proposed for a site near Glendale Community College and Civic Auditorium as seen in this rendering, the Museum’s current proposal is in Downtown Glendale, where the building has inflated in size to consume the majority of the Central Park. The final design is still being developed with the City. More via Armenian American Museum. 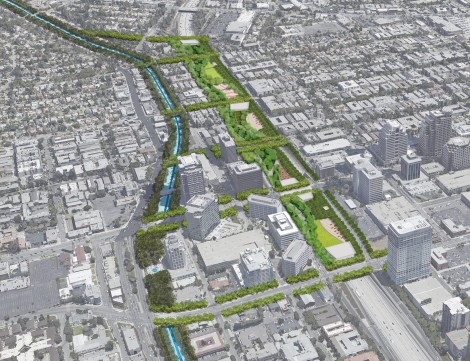 (Above) Space 134 by Melendrez – The concept of “capping” or “decking” the 134 Freeway as it cuts through Downtown Glendale was first expressed in a sketch in the Downtown Specific Plan. This rendering was ultimately developed following a series of concept studies that concluded in 2015. “Space 134,” as the project is known, remains a tantalizing vision for Glendale’s future, one that the City is committed to pursuing, but one that may ultimately never be built, like the projects above.