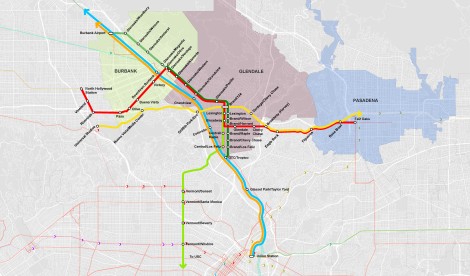 Glendale Connected is a proposal advanced by the City of Glendale for a series of regional transit routes that individually and collectively integrate Glendale into the larger regional transit system and link the City to nearby destinations such as Burbank Airport, Union Station, Pasadena and the Media Center. The proposal serves as the framework for the South Glendale Community Plan, guiding new development opportunities as new transit routes come on line. The proposal derives from current regional transit planning as outlined by Metro’s Measure M, the High Speed Rail Authority and other transit providers, but expands upon these plans to imagine new routes that better serve Glendale’s interest. The proposal ultimately establishes a platform for political dialogue at the regional level, providing a specific set of projects that local political leaders can advocate for.

One of the signature projects in the Metro’s Measure M plan is a Bus Rapid Transit (BRT) route connecting the Del Mar Gold Line Station in Pasadena with the Red Line / Orange Line Station in North Hollywood. The current preferred route is a street-running alignment (red line below) that runs down Colorado Boulevard in Eagle Rock to Glendale, then north on Central Avenue in Downtown Glendale before heading west on Glenoaks Boulevard to Burbank. Once in Burbank, the BRT turns down Olive Avenue towards the studios in Media Center before linking to North Hollywood. The street-running alignment opens up possibilities for the BRT investment to leverage new land use patterns along various streets as well as promote new streetscape elements such as bike lanes, pedestrian improvements, and first/last mile connections into nearby neighborhoods.

Anticipating that California High Speed Rail (HSR) will eventually serve the long haul passengers from Palmdale, the current Antelope Valley Metrolink line (blue line) can transform into a feeder to HSR (orange/gold line) with more local service.  Accordingly, both more frequent service and more stations can be introduced along the route, particularly if the Metrolink locomotives train sets are replaced with either DMUs (diesel multiple units) or electric powered trains, enabling trains to accelerate into and out stations quicker, thereby making more frequent stops. New Glendale stations are proposed at Colorado near Pacific Edison Center and Grandview to serve Northwest Glendale neighborhoods and the GC3 Disney/Dreamworks campus. Given that tracks are directly adjacent to San Fernando Road, bus connections at these stations would be more efficient than at the current Glendale Transit Center.

Next the plan imagines a median-running streetcar on Brand Boulevard (dark green line), linking the existing rail stop at the south end of the City with the downtown retail core. Continuing past the downtown Glendale, the streetcar turns west on Glenoaks Boulevard, heading towards the Burbank airport and future high speed rail station, passing by downtown Burbank and then Woodbury University on the way. Conveniently, the right-of-way for such a streetcar exists, as this 10-mile route follows the historic Pacific Electric Railway streetcars that connected Downtown Los Angeles, through Glendale, to Burbank.  This system is imagined as a local service, built and operated thru a joint agreement between Glendale and Burbank, funded by a combination of Measure M dollars, local development impact fees, transportation assessment districts, and HSR local connection funds.

Eventually the Measure M plan calls for an extension of the Gold Line Light Rail from Pasadena thru Glendale to the San Fernando Valley. The Glendale Connected Plan sees this as a cross-regional route (yellow line), running down the 134 Freeway center median for much of its length, with Glendale stations located at Glendale Adventist Medical Center (Verdugo/Chevy Chase), Brand/134, and Griffith Park/LA Zoo. From Griffith Park, access to the GC3 Disney/Dreamworks employment center is via a foot bridges across the Los Angeles River. 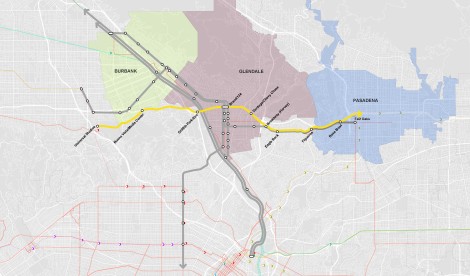 Finally, Glendale Connected anticipates an expansion of the region’s subway system, with a branch of the existing Western subway from Hollywood’s Vermont/Sunset Station into Downtown Glendale.  The new subway (light green line) will follow Los Feliz Road under Atwater Village, with stations at Tropico/GTC, then under Brand Boulevatd to a station at Colorado/Brand and a terminus at Brand/134 (at Space 134). Presuming the subway also extends south of Wilshire Boulevard, this line would ultimately offer one-seat rides from Downtown Glendale to Koreatown and USC, and two-seat rides to Downtown Los Angeles, Hollywood, MidWilshire, Beverly Hills, Century City, Westwood/UCLA, Culver City and Santa Monica.