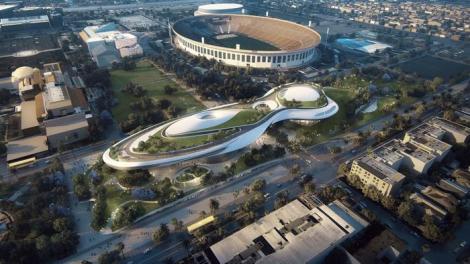 “‘The erosion of Exposition Park’s public open space continues’ So wrote urban planner Alan Loomis nearly 15 years ago, in an essay published by the Los Angeles Forum for Architecture and Urban Design.”

LA Times architecture critic Christopher Hawthorne leads off with this quote in his front page assessment of the proposed Lucas Museum of Narrative Art. Reading his essay is a case of deja vu all over again:

In 2003, I wrote Exposition Park “…is an allegory for Los Angeles in general.  Just as LA’s natural and agricultural landscapes have been systematically developed without consistent open space protection, Exposition Park has been treated as vacant land waiting for buildings.”

Hawthorne replays this notion, and writes Exposition Park “…is also a stage where the region’s oldest morality play, the one casting Southern California as a paradise lost, a region whose beauty and natural resources are perennially threatened by overzealous development, is mounted, like the “Ramona” pageant, again and again.”

Hawthorne concludes with this anachronism: “That makes Exposition Park a kind of throwback — an anomaly in the Los Angeles now taking shape but a deeply familiar civic landscape in historical terms. For better and worse, the park is one territory where L.A.’s reputation as an opportunistic city above all, a city proudly on the make, has refused to fade.as long as there are any slivers of open space left in the park, it seems destined to continue operating more as a tabula rasa in the civic imagination than a fixed, finished landscape that calls out for protection.“