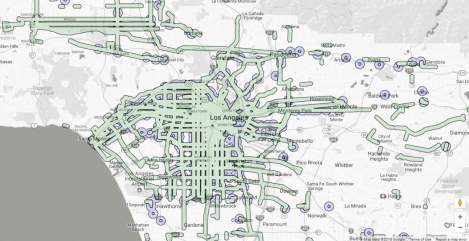 While the Senate has yet to start their debate, the public debate has already begun, right?

AL: Yes, for a bill that is so far nothing more than a proposal and has yet to make it into committee, let alone the floor, it has generated a great deal of interest and debate. Which I think is good – a public debate about planning policy is healthy for city-making.

We are clearly facing a housing crisis in California, especially urban California, and it seems clear that increasing supply is essential to addressing that crisis. It’s a simple numbers game generated by supply-and-demand economics – demand is high, and we need a massive infusion of supply to get the costs of housing down for all income levels. Apparently local jurisdictions, individual cities, have not been permissive enough through their own zoning standards to make a meaningful dent in the housing supply, so the State is taking charge. It’s also important where the State, through this bill, is saying housing should go – near transit. I also find it interesting that the allowed density or height of buildings in the proposed bill is related to street width. That suggests there is some measure of urban design thinking in the bill – maybe the authors understand the classic urban design idea of the street as a public room based on proportions of width to height.

On the other hand, as a practitioner of local government, the idea that the State is going to strip local authority and control away in favor of a one-size-fits-all zoning solution is frightening. Local planning commissions and design review boards – to which I’ve been both an appointed voting member and staff liaison – go to great lengths to massage buildings into better relationships with their context. As I read the proposed legislation, that ability is dramatically curtailed, probably at the expense of well-designed communities.

Another criticism of the bill is that will provide yet another reason for communities to oppose new transit infrastructure.

Given your critique, and the critiques of others (namely those of LA City Councilmember Paul Koretz, the Crenshaw Subway Coalition, and the Sierra Club) what might the bill’s sponsors consider going forward? What revisions or amendments might you like to see debated?

AL: Much of the concern over the bill is that, as first drafted, it wasn’t clear if it would override existing pro-housing rules, and it did not define what “high-transit” means. I think this is critical – just because a transit route draws a line across the city, I don’t think high-density development should be supported parallel to that entire line. You can only access transit at specific points, so around those points is where transit-oriented development and densities should be supported.

I’d like to see amendments that acknowledge and reward cities that have been trying to enable transit-oriented development already. Places like Santa Monica and Pasadena rewrote their citywide plans and zoning to promote density around rail lines that were planned, but didn’t yet exist (Expo and Gold Lines). So I’d propose a kind of performance-based amendment that requires cities to adhere to the standards of the bill until they can develop their own local plan to accommodate the densities the bill would otherwise generate.

Of course, wealthy cities like Santa Monica and Pasadena, which can afford deep planning staffs and expensive consultants, would be able to meet this local plan requirement without much trouble, while poorer communities like Paramount and Norwalk could get the short-end of the stick. Perhaps there needs to be some type of outside funding to assist those communities, maybe by realigning the criteria of SCAG or Metro’s TOD Planning Grants, or other similar funds in other regions.

Pivoting from SB 827 and planning legislation, could you give us a quick history of DLA and its originator. Tell us about when and why you started it, what is was, what it has been, and is now as the LA Forum rolls into its 31st year?

AL: The Delirious LA email list started in 2001. I had just graduated from SCIArc, and every week I’d send out an email to my coworkers at Moule & Polyzoides asking who wanted to go to the SCIArc lecture that week. Two of my coworkers had also just graduated from USC and UCLA, and they did the same for lectures at those schools. So I said three separate emails is silly, let me consolidate the lecture series into one weekly email with three events, which I then sent to everyone in the office, plus a few friends. A few months later Dion Neutra asked if he could add a Neutra Office event to my calendar because he heard that I had this extensive email list. I laughed, and told him that in fact only a few friends got my email, but added his event anyways. His request got me thinking that there might be a larger audience for what I was doing, so I expanded the list of events, started spamming places like the AIA, MAK Center and LA Forum. Since I was also maintaining a running calendar that projected well beyond a week, I turned that calendar from a word doc on my computer into a website for anyone to look at and offered people a means to sign up for the Monday AM email. When I passed the email list to serve to the Forum in 2005 it had somewhere between 2000 and 3000 individual addresses.

I think people who got the weekly DLA email from me assumed I was a man-about-town, and constantly running off to all the events I published. Of course, that wasn’t the case – at best I could get to one event a week. But in compiling a weekly list of architecture and urban design events I was trying to suggest that we, in our professional id of sorts, were engaged in regional conversation about the changing nature of Los Angeles and the role of architecture and planning in making that new Los Angeles. The list of events was very consciously curated in that way – the inclusion of urban design events and tours was very deliberate. Perhaps in some way the subconscious regional conversation documented by DLA prefigured our current interest in planning issues and topics such as SB 827.