Design Review authority within the Glendale Downtown Specific Plan and San Fernando Road Redevelopment Corridor resides with the Glendale City Council, with advice and recommendations from the City’s Urban Designers. In order to encourage new development in the wake of the Great Recession, a permit streamlining ordinance (#5571) was adopted in 2007 that consolidated all discretionary review for projects within the these two redevelopment areas under the City Council / Redevelopment Agency. This ordinance eliminated an advisory review by the City’s appointed Design Review Board and Planning Commission, thus granting the City’s Urban Designers significant authority to interpret design guidelines and steer new projects towards hearings with the City Council. 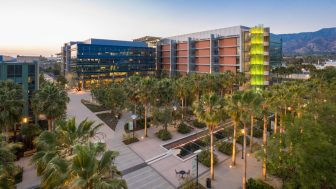 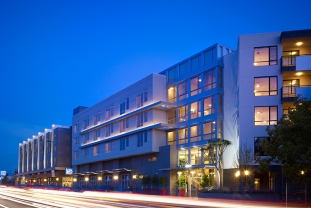 The Link by TCA 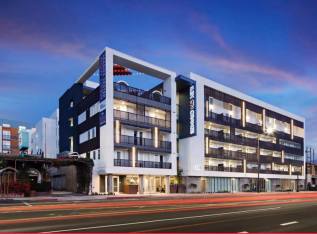 Lex on Orange by TCA

The Griffin by Architects Orange for MillCreek Residential

Like Loading...
This week Glendale adopted its first Citywide Pedestrian Master Plan. The Plan is the most data-driven policy proposal yet in the City of Glendale. The Plan’s recommendations are based on extensive research on where, why and with whom the city’s pedestrian collisions have historically occurred. In response, the Plan focuses limited City resources where it can have the biggest impact – on the 9 miles of city streets where 40% of pedestrian collisions occurred. The Plan proposes a series of specific projects, and additionally establishes a toolbox of pedestrian safety measures designed around proven techniques, best practices for future projects. :: #GlendaleWalks #BeStreetSmartGlendale #HeyImWalkingHere
An early outreach component in creating Glendale’s first Citywide Pedestrian Master Plan was a series of ad-hoc temporary pedestrian wayfinding signs created by @here.la and a targeted marketing campaign under the slogan “Be Street Smart Glendale.” Unlike previous pedestrian safety PSAs the City produced, “Be Street Smart Glendale” was informed by market research and focus groups similar to other public health campaigns, such as anti-smoking programs. :: #GlendaleWalks #BeStreetSmartGlendale #HeyImWalkingHere
On March 23, City Council unanimously approved Glendale's first Citywide Pedestrian Master Plan. This approval is the culmination of 6 years of work by many talented consultants and City staff that began with a walk-about in November 2016. I am proud to have helped initiate this effort when I was Deputy Director of Urban Design & Mobility in Glendale (and participated in this first walk-about). Congratulations and thanks to the team: @nelsonnygaard @here.la @kpff_la @deborahmurphyla @kysergile Fehr & Peers and especially #notonsocialmedia Fred Zohrehvand, the City's Project Manager / Mobility Planner for whom this was a passion project from day one. :: #GlendaleWalks #BeStreetSmartGlendale #HeyImWalkingHere
2020 Hindsight :: #ADecadeOfLAUrbanism :: The Street, 2020